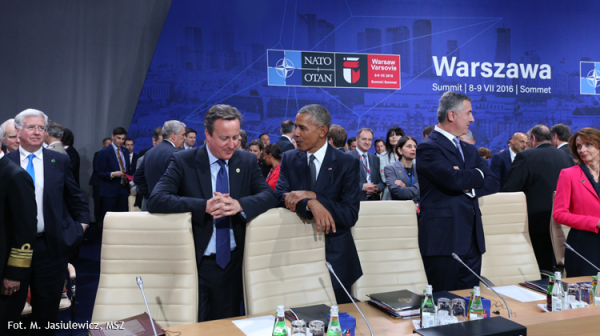 Mazurkas Catering 360° provided catering services during the NATO Summit, which took place in Warsaw, 8-9 July 2016. 61 delegations, including 18 presidents, 21 heads of governments and 80 ministers, participated in the Summit.

Preparations for the service during the NATO Summit lasted one month. Mazurkas Catering 360°'s Chefs have prepared in details logistic plan of the event, and the fact is it was very demanding. During the 2-day Summit 80 cooks managed by 10 chefs, with the support of almost 400 waiters and 150 persons of operational staff, have prepared and served catering at 4 levels of PGE National Stadium, in a special tent built on the main pitch, 2 tents built at the stadium meadows and the Grand Theatre, where the gala dinner for the ministers of foreign affairs of the NATO member countries was planned. Altogether 15 different menu proposals were prepared for the NATO Summit using 63 tonnes of products, which wre delivered to the PGE National Stadium with 50 trucks. All of the meals were prepared at 2000 sqm of the kitchen area, under the round-the-clock supervision of Voivodship Sanitary and Epidemiological Station, Military Sanitary and Epidemiological Station, Government Protection Bureau (GPB) Sanitary and Epidemiological Station, GPB officers and Secret Service officers. Around 30.000 meals were served. The management of Mazurkas Catering 360° Gastronomy Department as well as the Chef remained in permanent contact and directly cooperated with the White House Presidentail Food Service within the scope of preparation of the lunch for the US delegation led by the US President Barack Obama.

Mazurkas Catering 360° team at the area of PGE National Stadium served catering exclusively during the 2 days of the Summit:

Additionally, 24h catering services were rendered by Mazurkas Catering 360° in business zone (coffee breaks for 300 persons) and restaurant area for the media arranged for 2200 persons, with different breakfast, lunch and dinner proposals as well as 24h coffee break (over 11 000 of meals were served!).

– Catering service during the NATO Summit required great preparation work as well as experience of the persons who were directly responsible for the execution of the service. - underlines Iwona Kątny, Head of the PR & Marketing Department of Mazurkas Catering 360°. - Mazurkas Catering 360° was the only catering company in Poland which decided to take up a challenge of fulfilling the requirements of the Ministry of National Defence regarding the timing of execution of service as well as the scope of them. This proves how complicated the whole catering service was. Let the extreme satisfaction from being part of the most important political event of the year, which everyone obtained, be underlined by the personal congratulations received by the Mazurkas Catering 360° team from the President of Poland Andrzej Duda. - adds Iwona Kątny.

Hereby we would like to thank the whole Mazurkas Catering 360° team for their extreme commitment in execution of this project. Thanks to you we were able to execute one of the biggest catering project in the history of the company!