The first attempt before the European Championship is already behind us! The Catering Show 2012 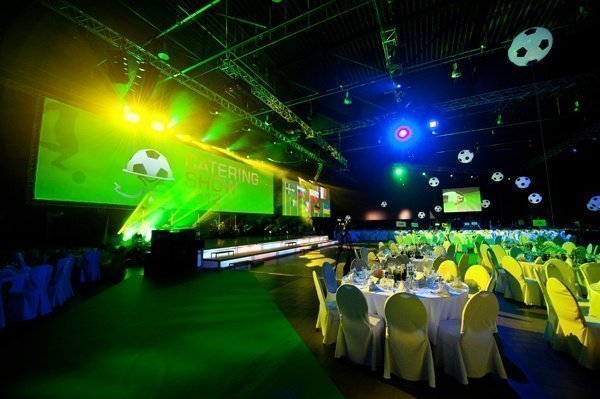 On 24 February, the Catering Show 2012 was held at the EXPO XXI Warsaw Centre. The first test before the Championship in June was passed successfully. Mazurkas Catering showcased its masterful cooking potential in a football setting, EXPO XXI revealed the potential of its Centre in relation to event organisation, while BRILL AV Media provided the exquisite audio and visual setting. The purpose of all this was to create a truly football-oriented atmosphere for more than 950 guests who attended.

While waiting for the event to start, some guests admired a performance by Magdalena Sztencel and Kamil Dziliński from the D3Art group, while our “Inside the Kitchen” zone allowed them to get a foretaste of the delicacies waiting for them later that night.

At 7 p.m. sharp, the Catering Show 2012 guests who had gathered at the venue were shown the football-themed decoration prepared at the EXPO XXI Warsaw Centre.

Entering the room cheered on by fans allowed everyone to feel like at a real stadium. As it happens during football competitions, the event started with a presentation of the organisers’ teams. The EXPO XXI Warsaw Centre team went on stage accompanied by children from the Znicz Pruszków Football Academy (born in 2003).

The handsome gentlemen from BRILL AV Media were accompanied by dancing cheerleaders from the Hasao team.

There was a lot of movement towards the end, due to the Mazurkas Catering team arriving on Harley Davidson motorcycles, followed by vintage cars with the waiting staff. Finally, the long-awaited chef arrived in a real army Hummer and immediately proceeded to check whether the cooks had made the grade.

After the presentation of the teams, the guests were welcomed by the Presidents of the Management Boards: Żaneta Berus (EXPO XXI Warsaw Centre), Andrzej Bartkowski and Andrzej Hulewicz (MCC Mazurkas Conference Centre & Hotel), and Michał Czerniak (Brill AV Media). Christopher Gibbons from UEFA, who was attending, also took the floor.

The food-related part started with a wine ceremonial, followed by the main course, also served ceremoniously. At that point, a surprise was waiting for the guests: 10 different dishes appeared on every table, each representing a different European country.

The 16 buffets representing all the countries whose teams were playing in the European Championship also enjoyed huge interest. Each of them was excellently decorated with references to the relevant country, and each was full of original delicacies imported especially for the event.

The specialities didn’t end there. In a ceremony involving over 150 waiting staff members and 50 cooks, the special courses were brought into the room: roasted boar, roasted beef and shark. As it was a football-themed catering show, the ceremony was supervised by a strict referee.

Variety to the whole show was added by all sorts of artistic performances, by The Prisoners, D3ART, Russian Revue, Iwo Orłowski, Warsaw University of Technology Song and Dance Ensemble, and the Varsovia Brass Quintet. Drugi Tydzień and The King’s Friends were two already tried and tested bands playing music to dance to.

At the end, a cake looking like the half of a huge ball was brought in in the light of burning flares and accompanied by several dozen bouncing balls. Pictures were taken together and the cake was cut jointly by those attending.